Retired since 1996 from teaching Drama / Theatre Arts and People, Beliefs and Society at Hawker College, Canberra, Australia. Theatre reviewer for The Canberra Times 1996-2009.  Currently freelance writer and theatre reviewer for Canberra Critics’s Circle. Author of First Audition – How to get into drama school (Currency Press 2002) and Burning Bright – Teaching Drama online at www.frankmckone.blogspot.com.au .

Born in UK, 1941; Australian citizen; has lived in Australia since 1955; married, with two daughters.
Frank, who gained Master Teacher status in the ACT education system in 1982, trained in educational and community drama under Prof. Anton Witsel CAL OAM.  He is an honorary life member of the ACT Drama Association and was instrumental in constructing the first constitution of the National Association for Drama in Education.  He was closely associated with the establishment of the Canberra theatre-in-education team, The Jigsaw Company, in 1976, and had his play The Death of Willy workshopped at the Australian National Playwrights Conference 1981.  He was Chair of the Board of Carol Woodrow’s WildWood Theatre Inc. through the 1990s.  Admitted as a Fellow of the Australian College of Education in 1986 for leadership in drama education as an outstanding teacher and through contributions to course development and teacher in-service education, and a Fellow of the Royal Society of Arts since 2003, Frank is now a freelance writer.  His  theatre reviews can be found at www.ccc-canberracriticscircle.blogspot.com and at www.frankmckone2.blogspot.com.au. 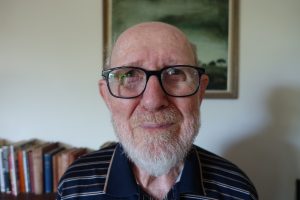 Frank is an exchange artist for Snailbox | The Slow Project.

Photo: Meg McKone, Frank is in front of The Pinnacles by Pro Hart, purchased by Frank in 1963.