I park at the northern reclamation pond, near the Cumbungi (gummiuk) I noticed yesterday. It’s bright out and already warm, heading for 31 today as summer somewhat unexpectedly asserts itself at the end of the season. A clear sky arches overhead, reflecting blue in the still water edged with green sedges, making claims to the picturesque. 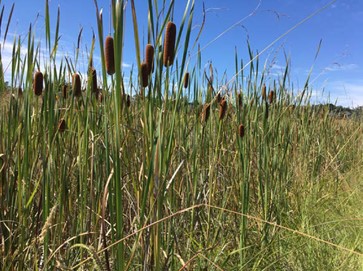 Rosie and I head south, skirting the southern edge of the pond and passing the sewerage pumping station. A black cormorant starts and shuffles awkwardly further out into the water. He might be the same one that often perches on the concrete barrier arcing across the southern pond. At the spillway between the two ponds, a mound of light brown reeds is caught into the metal guard fence. Phragmites, I think, the common reed, left there after the last rainstorm. The reeds are still damp and pliable I think that I must come back and collect some and see if I can weave them into a form. This feels like a better option than cutting fresh reeds, though I know the species is okay conservation-wise. I remind myself that I have to learn how to weave. 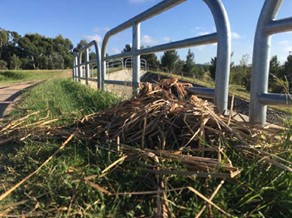 Following the small drain that runs alongside the pond, we pass Stromlo Cottage. This little house, built in the 1920s, I think, was once the Sewerage Works keeper’s cottage. Today, it looks cute. It’s been done up a bit, with new paint and wisteria climbing on the verandah. In the front garden there’s two angular sculptures made from pink plastic tree guards, one fallen to its side. On the high, black security fence around the cottage, two corflute panels have faded in the sun and the interpretation is now almost indecipherable. Somehow, this makes me happy; it feels like the sun is making a joke.

Opposite, down where water flows across the white concrete in the shallow drain, two bronze wing pigeons are courting, bowing, and fanning their tails at each other. Ahead, a willie wagtail lands and then flits forward, keeping just ahead of Rosie’s inquiring nose. I’m soon burdened with a green plastic baggie (compostable, of course) of puppy poo, which I surreptitiously tuck behind a prominent clump of grass, to be collected on the way back to the car.

At the top of the decline to the Molonglo, there’s a large sign, the ‘Coombs Path Network Wayfinding Map’. I spend a few minutes looking at it, reflecting on how it fails to help people walk in loops. The main path runs along the river but connecting routes all cut through the adjacent suburbs. 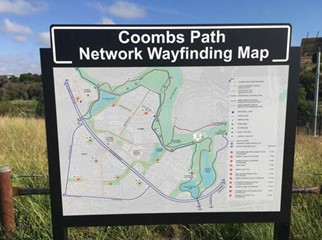 I turn left and head along the Molonglo River Reserve. My Field Guide to the Plants of the Molonglo Valley tells me that the reserve was ‘secured in 2011 to offset impacts from the Molonglo Valley development’. It was intended to protect threatened species and communities such as ‘box-gum woodland, natural temperate grassland, Pink-tailed Worm- lizard, Superb Parrot and Swift Parrot’ (1). As the elegant corden steel entryway, it’s quite difficult to imagine any of these species, but it’s nice to look down along the river burbling through some rocks.

The wide path is well-compacted, but its open and hot. There’s no shade. It feels dry, but everywhere there is evidence of water asserting itself in the landscape, finding its way down to the river. Where an access path joins the main route, run-off has eroded an ankle-busting channel through the gravel surface. The shape is quite beautiful, reminding me that there is no such thing as a ‘creek’, but rather many, fluid threads of flows. 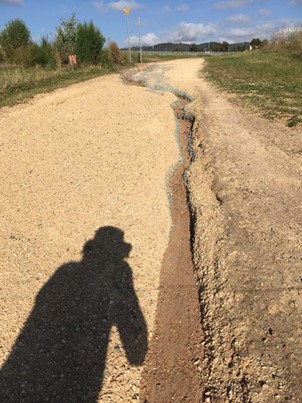 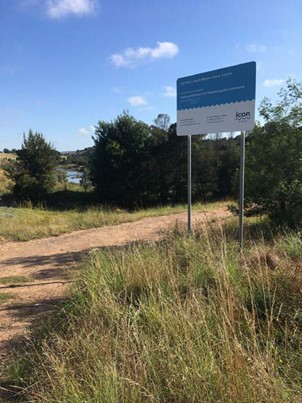 Further along, a sign declares the site of ‘CX10382 – North Weston Odour Control’. Nearby, downhill from the path, is a large concrete culvert – sealed, with a grate and spillway. I can’t figure out what’s happening here but make a note to self to find out. Where the water winds down the hill a bit, about twenty Black Wattle (nummerak) trees have grown. Rosie and I climb gingerly through the long grass to take a closer look, anxious about snakes and broken bottles. I read in ‘Ngunnawal plant use’ that Black Wattle’s sap can be used as an adhesive or mixed with ash to create a kind of cement (12). I’m keen to experiment casting with it and I find a little knob on one tree, but I can’t pry it off. It’s hard as anything and I’ll have to come back with a knife. Maybe I’ll head up onto Mt Stromlo, where the Black Wattle has carpeted large areas, the first to reclaim the devastation after the 2003 bushfire and still holding ground. 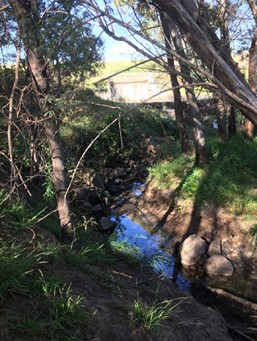 I turn down to the river and stop to chat to a couple out with their dog. Rosie is a great way to meet people! I realise that I need to start talking with people about the waterway and am distracted by thinking about how I might do some vox pop interviews with walkers. I could set up a kind of ‘River Stories’ stall at the start of the reserve track and catch people as they come by.

I think some more about starting a series of group walks, perhaps based at Stromlo Cottage, which is now a community centre, I think. Perhaps, I need to just organise a walk for next month, inviting participants to walk a section of the creek and collect, draw or describe one thing they find beautiful about the place. This might be a good way to get started with shared encounters with the waterway and learn more about how people see the creek.

Perhaps, I could combine the two, and have a structure out in the open that’s a ‘river studio’ – a place where we create and record encounters with the river (sort of like Amy Sharrocks’ Museum of Water). It would be great to have some kind of built space for this base – like a ‘grow pod’ or the architectural installation in east London (can’t remember the name!).

I cross the river via the concrete walkway, pausing to look at rocks along the edge. The geology seems all mixed up here, though I don’t know much about it. In the river there are beautiful, jagged eruptions, shaping and turning the stream, wearing in places lichen mantels. I think these monoliths are bluestone – ancient volcanic rocks which probably extend far underground. There’s the smooth, rounded rocks and pebbles sitting in sand in the riverbed, toned beautifully in subtle browns, creams and purples. Along the path and in places on the banks, there are rough-hewn blue and tan quarried boulders, perhaps granite, which have surely been brought in as landscaping from a quarry elsewhere. And then there are the gabons, massive rectangular barricades where steel and wire mesh captures what I think is also bluestone shrapnel. 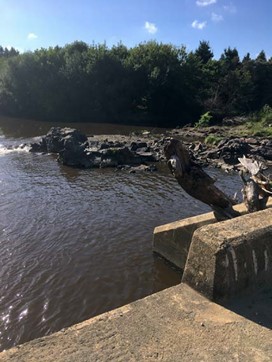 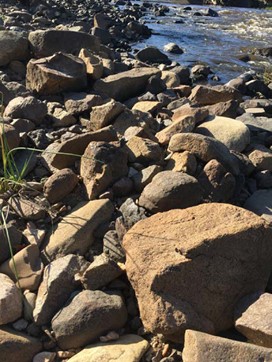 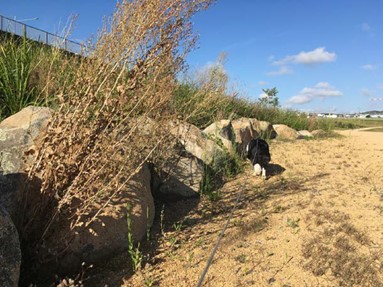 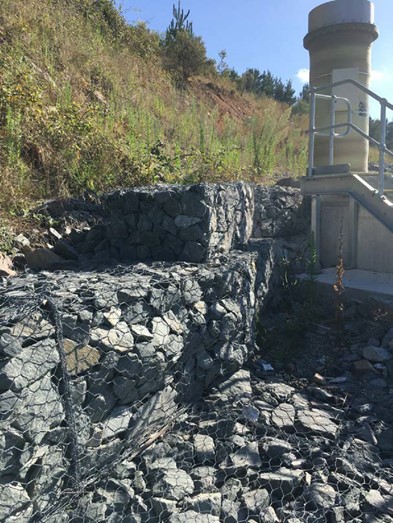 Rosie and I walk back along a track on the northern side of the river. The sides of the road have been cleared and now densely populated with tall green stems. It’s a weed you see everywhere, and I know that it’s a weed, but I only find out once I get home and leaf through my field guide that it goes by the wonderful name of Flax-Leaved Fleabane (146). Apparently, the boiled leaves can be used to remove fleas from dogs. Do you beat them with it? 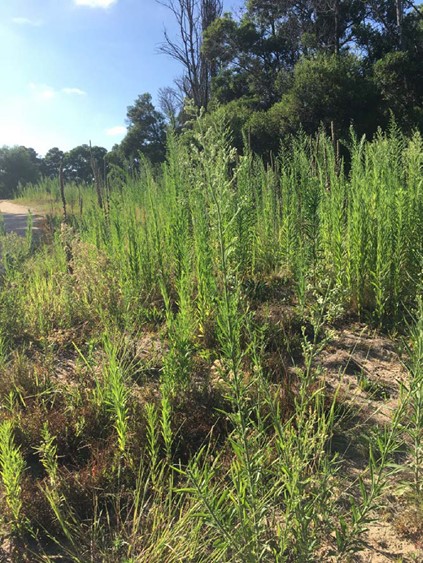 At the top of the rise, Rosie stops to inspect a small cairn someone has built on a boulder. It seems to mark a beaten path through the long grass, and we turn off to check it out. It turns out to be steep and Rosie needs some encouragement to slide down. I feel guilty about, no doubt, creating a little erosion gully next time it rains. At the bottom, we end up on a gabon, and Rosie has to walk carefully. Her paws could easily get stuck through the wire mesh, while its quite comfortable for my larger feet.

We head back across the river on the tall concrete bridge, pausing to admire a silvery dead tree trunk that has washed up against the structure. To the left, I notice a pine tree has fallen, its needles turned a beautiful russet. We wander back around the northern pond towards the car, where I pause to drop the poo bag into a bin, sending it on its way to some ‘shadow place’ rubbish dump. A strange moment of preventing nutrients dispersing into the river system here, or indeed decreasing the pleasure of walking along the creek, while adding to the same problem elsewhere. I wonder for a moment about how water leaches through the rubbish tip.

As we arrive back at the parking lot, a man is standing on the edge of the pond flying a model seaplane. He’s good at it, sending up into the sky, then letting it stall and fall, only to swoop off again and turn a barrel roll. As I sit watching for a few minutes, a passing cyclist yells out, ‘Now, that’s cool!’. Rosie is more interested in the ducks.

This project is part of the ACT Government’s Creative Recovery and Resilience Program.