Singer-songwriter Sophie Edwards has been a staple in the Canberra music space for multiple years now, and most recently has been pursuing a steady stream of new music.
After releasing a couple of singles at the start of career, Sophie made an exciting return in 2020 with the release of ‘Seconds’ – her first under new label Vacant Room Records. Sophie continued to make the most of 2020 by recording a string of new material, as well as celebrating the announcements of winning both the Women in Music Mentor Program for the Australian Independent Record Labels Association and a mentorship with Ricochet MATES, led by KLP.
In 2021, despite lockdowns and pauses, Sophie released her debut EP ‘Feel Again Soon’, launched her project ‘She’s on the Bill’, and performed her first tour. 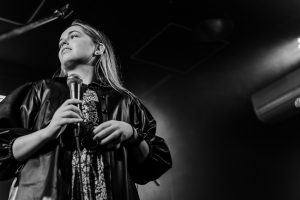 Sophie is an exchange artist for Snailbox | The Slow Project.
Photo: Meg Houghton